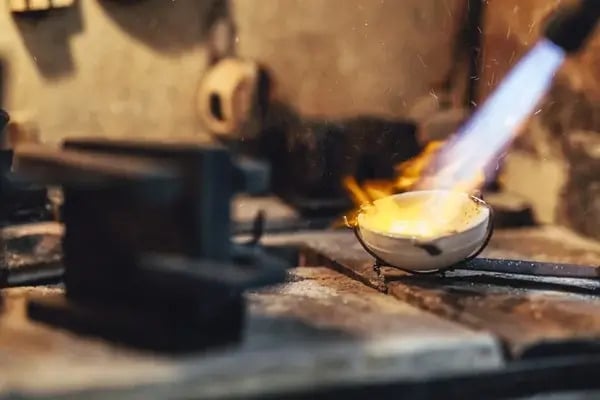 Reasons for melting down precious metals such as silver vary, but the usual prime motivator is usually to earn those extra dollars. Over the years, the worth of these gold, silver, and platinum coins has been on the rise, as is the general price of the base metal used to make these coins.

Whether for numismatic purposes, or simply for intrinsic value, these coins have a very large monetary value, and to understand this dynamic industry, one has to have a few details in check. The cash equivalent of silver for example, most especially in intrinsic value advances in tandem with changes in the change in the price of pure silver in the world market. The following can be used as a guide for the different melt values of any metal.

The Intrinsic Profit of Silver Coins

Silver is not always associated with coins, and the silver cash equivalent in different materials remains relatively the same. Whether in a silver cup, a silver plate, or in a silver spoon, silver is an after commodity. However, the most common form of silver is usually in silver-derived coins. Governments everywhere use silver in making their currencies, and sometimes this makes its way to silver collectors.

Silver is among the most dynamic components to understand when it comes to intrinsic profit. The year of the mint of the silver coin usually has a direct influence on the silver-derived coin’s melt value and numismatic advantage. Different sections of history utilized different mint procedures, and thus different amounts of silver can be recovered in different coins from different silver coin production periods.

In calculating the intrinsic profit of these silver coins, older coins usually tend to fetch more amounts of money as they have more silver content as compared to common date silver coins, as shown by the cash equivalent of the following silver-related coins.

Barber silver coins usually date back to the year 1892. This has a lot of historical significance and therefore collectors are constantly on the lookout for them. In addition to this, the base composition of silver in these coins puts silver as the bulkiest, accounting for ninety percent of the total weight of the coin. Consequently, the barber silver dime in the current market, with a weight of 2.5 grams fetches $1.82, corresponding to the silver content. The silver quarter on the other hand with a weight of 6.25 grams fetches a handsome price of $4.55. Coming in last, but definitely not the least, is the Barber silver half dollar that stands in at 12.5 grams and has a world market price of $9.10.

A rough estimate of the melt value of the intrinsic silver in all of the silver-derived coins mentioned above can be calculated from the simple fact that they all share a common characteristic of having ninety percent silver content.

The change after the year 1964 is credited to the fact that the US government no longer incorporated silver into the production process of quarters and dimes.

The underlying factor during this critical period of silver coin manufacturing is primarily because of world war two, which was fully fledged during this time. This led to an exponential increase in the cash equivalent of nickel, and therefore the base composition percentage of these coins shifted in a manner that saw silver taking only 35 percent of the overall weight. This translates to a lower cash equivalent for intrinsic silver in these coins.

At a weight of five grams, these silver nickels will only fetch about $1.42.

In other regions of the world, silver coins fetch different prices for their intrinsic silver content, and consequently, their melted utility is directly dependent on the base metal percentage enjoyed by silver. It is also important to mention that as is commonly the case with silver derived coins, the intrinsic benefit is not only derived from the silver. Other base components such as copper and nickel also enjoy favorable market prices and demand.

These silver derived coins are among the purest forms, and obviously have the highest percentage of silver as the base component. Roughly, the percentage of silver in these coins is usually around 99.93 percent. These coins have the highest price-to-weight ratio, and the American Silver Eagle with 31.5 grams attracts a cool 25.17$. America the Beautiful five-ounce silver has a weight of 155.5 grams and has a price of 125.85$. It is, therefore, true to say that these coins are a true gold mine.

Collecting silver derived coins or hoarding them can therefore prove a worthwhile endeavor, especially under current market trends where the price of silver exhibits an upward trend. Understanding the intrinsic significance of silver in these coins demands an in-depth analysis of the period of manufacture and weight of the coin and not just what meets the eye.

The collector’s profit is the complete opposite. Coins with richer historical backgrounds tend to be in higher demand and fetch an equally higher price. Collectible silver is, however, a lot harder to come by, especially in the form of silver derived coins, as most people choose to pass them down as family heirlooms and therefore fewer coins can be found in circulation.

The Intrinsic Profits of Gold Coins

Gold and silver are analogous when it comes to their use in making currency, but this similarity does not extend to the intrinsic value. Gold has a higher price per ounce as compared to silver, and therefore gold coins are more valuable. Gold bullions tend to attract better benefits, but often, the coins are also good money magnets. The intrinsic profit for different gold derived coins in the country can be calculated using the following guide:

For Gold Coins Dating to the Year 1933 and Earlier

These coins despite having different weights and manufacturing periods are all synonymous in terms of base component percentage of gold which is ninety percent.

The Liberty head (Type 1) Gold Dollar of 1849-1854 weighs in at slightly over 1.67 grams and has an estimated price of $93.57. Just like in silver, the collector’s profit of these coins of gold is usually a bit higher, sometimes by half the intrinsic component, more so for older coins like this one with more historical information.

The difference between these gold derived coins and their predecessors is solely in their weight. All other factors were kept constant, including base component percentage and surface appearance. These newer coins weighed 4.18 grams and are worth 233.95$.

To melt either of these gold derived coins, would yield 8.359 grams of pure gold bullion, which is half the weight of the 10$ Gold head, and proceeding to sell either of them would draw in a hefty sum of 467.89$.

A replacement for the twenty-dollar Liberty head, the Saint-Gaudens coins are similar to it in numerous ways. Among the most notable similarities is the weight which is still 33.436 grams and the price which is 1,871.58$.

These gold derived coins are all of the Gold eagle types and some of the coins are big enough to form bullions from which they were first minted.

The year 1986 saw the kick-off of the production of the Gold Eagle coins, which would continue to present times. The five-dollar Gold Eagle coins weighed 3.393 grams and have a price of 193.45$.

Only second to the fifty-dollar Gold Eagle coins, the 25-dollar Gold eagle coins are half the weight of their counterparts and have a weight of 16.966 grams thus earning them the rightly fitting name of bullions, and a price of 967.23 dollars.

A true symbol of national treasure, the fifty-dollar Gold Eagle is the largest and weighs 33.931 grams. It has a price of 1,934.45 dollars and is therefore easy to sell. Bigger than most coins, and considered more of bullion than a coin, the Gold Eagle is an excellent prize for any collector, and also for melt value.

The buffalo gold is among the purest gold coins. The percentage of gold in the gold buffalo is 99.99 percent, which by most standards would be considered pure gold. Weighing at 31.105 grams, this gold bullion has a monetary value of 1,937.41 dollars.

Another gold bullion with a lot of worth from intrinsic profit is the First Spouse half ounce gold coin. It has a percentage purity of 99.99 percent and therefore has a higher profit per ounce. Weighing in at 15.552 grams the First spouse gold bullion has a price of 968.71 dollars.

The Intrinsic Benefit of Platinum

Platinum is another precious metal. For anyone looking to sell metallic components for intrinsic profit, these coins are an exceptional alternative as compared to the more common silver coins. Silver despite having a relatively high intrinsic benefit is more often in impure forms. Platinum on the other hand is used in making purer coins and therefore is better than silver.

Platinum coins in America have been used in:

Platinum Eagle is a close relative to the golden Gold eagle coin whose production began in 1997 and was terminated in the year 2008. Like all other platinum coins, these coins have a percentage composition of 99.95 percent. With 3.11 grams comes 102.72 dollars.

Commissioned in the same year as all other Eagle coins, and Similar in percentage purity, this coin has a content of 7.857 grams and has a price of 256.79 dollars.

A worthwhile coin to collect, the Platinum Eagle coin has the best intrinsic benefit of any platinum coin in circulation and remains so to present time. This specific platinum coin has a weight of 31.105 grams and has a market price of 1,027.16 dollars.

In conclusion, the intrinsic profit of silver and silver coins, gold bullions or gold coins, and other precious coins depends on the market practicality of the metal. Different metals have different intrinsic profits and the choice on which works best rests squarely on the shoulders of the interested party, but the information mentioned above can be used as a guide in selecting the best fit.

For those looking to cash in on their silver, these processes are a great path to take. Silver, however is not the only material available for melting. Gold is another alternative to silver and silver derived coins. Silver, remains the most abundant precious material, accessible to silver enthusiasts and non-silver enthusiasts alike.